The release concert for the new album ‘Soaked’ by the Brussels-based women’s trio Las Lloronas was scheduled for November 7, but Covid19 prevented this.  The trio then decided to record a video in which they talk about the process of making their album and their music.

Initially it was going to be an EP, but then more and more songs were added and it became an album. That’s what you get with such a multilingual line-up in a band – Las Lloronas sing in five languages, English, Spanish, French, Arabic and Hebrew – and such a wide spectrum of music styles (folk, pop, klezmer, blues), traditional roots larded with slam poetry.

The CD-release concert may be postponed…

THE’ ALBUM IS NOW AVAILABLE AND CAN BE BOUGHT ONLINE HERE!

The trio has always been inspired by a quality often present in folklore music. The quality of expressing deep-felt emotions, coming from the guts, real and raw. This gives rise to a shared experience where musicians and listeners together are soaked in a sensation that goes beyond words and talks straight to the body. This is what happens in small cafés or village squares or living rooms, where people dance and sing for each other, where passion is more important than skill, where music is catharsis and celebration at the same time and where it is consumed and shared, not as a commercial artifact, but as a basic human experience, that goes way back in time. 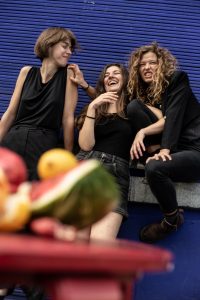 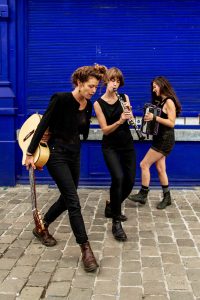