Hidden songs of Anatolia is the first album of Pinhan Trio. The repertoire consists of ten pieces, songs and instrumentals from various regions of Anatolia and the Caucasus, which are either widely unknown even in Turkey or, at least, didn’t receive the attention that they should have. Nilgün Aksoy was born and raised in Istanbul. She came to the Netherlands at the age of seventeen with her family. Listening to all varieties of Turkish music since she can remember, it was the voices of the old masters of regional music traditions that moved and influenced her most – so deeply that she decided to study Turkish music. The German brothers, Malte and Benjamin Stueck discovered traditional Turkish and Kurdish music coincidentally in some festivities of the early 90s and were deeply moved by its beauty and emotion. Since 2008, the three of them live in Hamburg and founded a school for Anatolian music to transmit the beautiful tradition of this music. 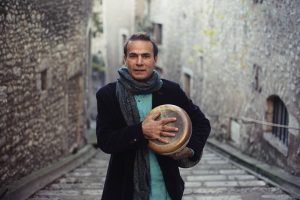 Levent Yıldırım is considered one of the modern pioneers of Middle Eastern percussion. Levent and his older brother Ahmet Misirli are the starters of a musical revolution that opened a new path for future generations of percussionists : they have brought a lesser-known instrument – the Egyptian doholla – into the limelight, and elevated it to the ranks of instruments able to claim a virtuosic solo repertoire.

The result is an infinite variety of sounds coming one after another in total spontaneity. Humility, fluidity and sincerity characterize the music of Levent, mostly improvised, which boldly synthesises the artist’s various influences from the Arab, Turkish, Indian and Western worlds. His third album, Doholla Tarang, invites you to immerse yourself in the intimate charm of Levent Yıldırım.