*La Calandria trio* unites three young musicians from Jalapa, Veracruz and Mexico around a passion for the jarocho sound.   This music, typical of the Gulf of Mexico region, became famous because of the well-known title “La Bamba”.  Though influenced by different musical genres like jazz, blues and symphonic music, the performers’ hearts remain attached to the musical and poetic richness of the jarocho fandango sound.   Alejandra Paniaguam, Raymundo Pavon and Arantxa Pelaez create their own pieces of music with the harp, the jarana and the leona.  Their texts recall everyday life in Mexico. 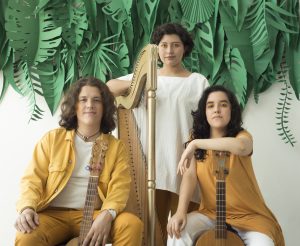 Singer, author and researcher *Karina Clavijo* is a key protagonist of the Afro-Ecuadorian music originating in the province of Esmeraldas, in Ecuador’s north-eastern region.  She usually plays the marimba, but also drums, the bombo, the cununo and other instruments specific to the region.  This kind of music, often performed at weddings, is recognizable by its typical songs in the form of questions and answers, and by its rhythms, such as the currulao and the bambuco.  Along with the Damajuanas and their rousing rhythms, Karina Clavijo delivers a strong battle statement for the equality of women.

After the concerts, the La Calandria group will offer us a *Fandango Jarocho* in the theatre lobby.  The Fandango Veracruzano, also called Fandango Jarocho, is a popular party that traditionally takes place in the centre and the south of Mexico’s state of Veracruz.  The Fandango’s principle is to gather the region’s musicians and dancers, who will, together, improvise the lyrics, the music and the dances.  They will alternate for a period that can last from a couple of hours to several days.

We welcome all musicians and dancers who would like to join us in this traditional music jam.

Don’t miss the marionette exhibition of Hernan Lira, the Argentine Gepetto! This puppet maker really has the gift of giving life to his creations, such is the passion and love which guides his craft. You can find his work on display over the three concerts of the festival. You may also bump into him in and around the theatre.

Latin América hosts an incredible diversity of musical traditions, inspired by the fusion of percussion instruments from Africa, wind instruments from Europe and the songs and flutes of the indian peoples. The *Sonamos Latinoamerica* festival has celebrated this diversity for many years and returns to Belgium for the fifth time for a week of concerts, parties and exhibitions.  And on this anniversary edition women artists will be to the fore !